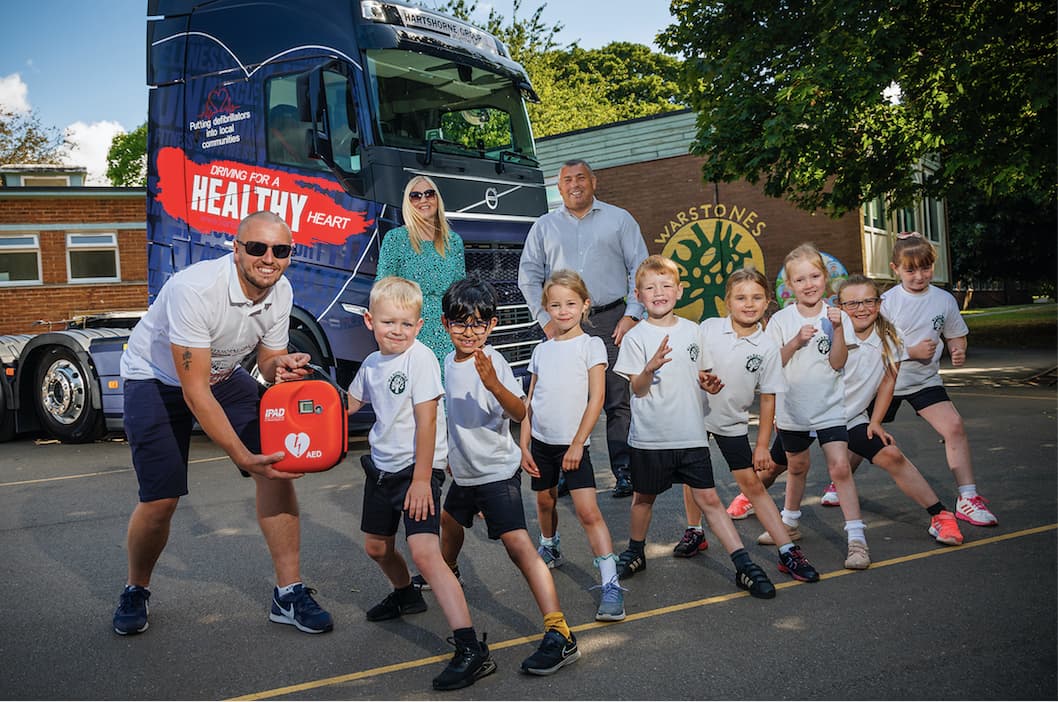 PUPILS at a primary school in Wolverhampton are raring to go after receiving a life-saving heart defibrillator from a local company.

The young students at Warstones Primary School in Penn lined up in their PE kits to accept the portable medical device, which can be used to restart a person’s heart in an emergency.

The defibrillator was donated by Hartshorne Group as part of the company’s Healthy Heart Campaign, which raises funds by inviting staff and customers to take part in physical exercise.

Gemma Evans, Assistant Headteacher at the school said: “The children enjoyed hearing about the Healthy Heart Campaign and we’d like to thank everybody at Hartshorne. It’s reassuring to know we have a defibrillator on site if ever a need arises.”

Among the children at the school is six-year old Joshua, whose dad Malcolm Turner has been named as Healthy Heart Champion for his fundraising efforts.

“My son has seen all the extra running I’ve been doing and he’s started taking part the junior park run. He loves going for a fast sprint at the end!” said Malcolm, who works as HGV Technician at the Hartshorne depot in Walsall, which supplies and services Volvo commercial vehicles.

The fund-raising campaign was launched last year in conjunction with West Midlands Ambulance Service. Around 30,000 people a year in the UK experience a heart attack that occurs somewhere other than a hospital. Defibrillators are portable and come with voice instructions.

Phil Brookfield, Operations Director at Hartshorne Group said: “We’d like to thank the ambulance service for all their help and advice. All of our nine depots across The Midlands are actively taking part in the campaign.”

PHOTO: Children at Warstones Primary School line up with Malcolm (holding defibrillator) and Joshua along with Assistant Headteacher Gemma Evans and Phil Brookfield of Hartshorne Group.