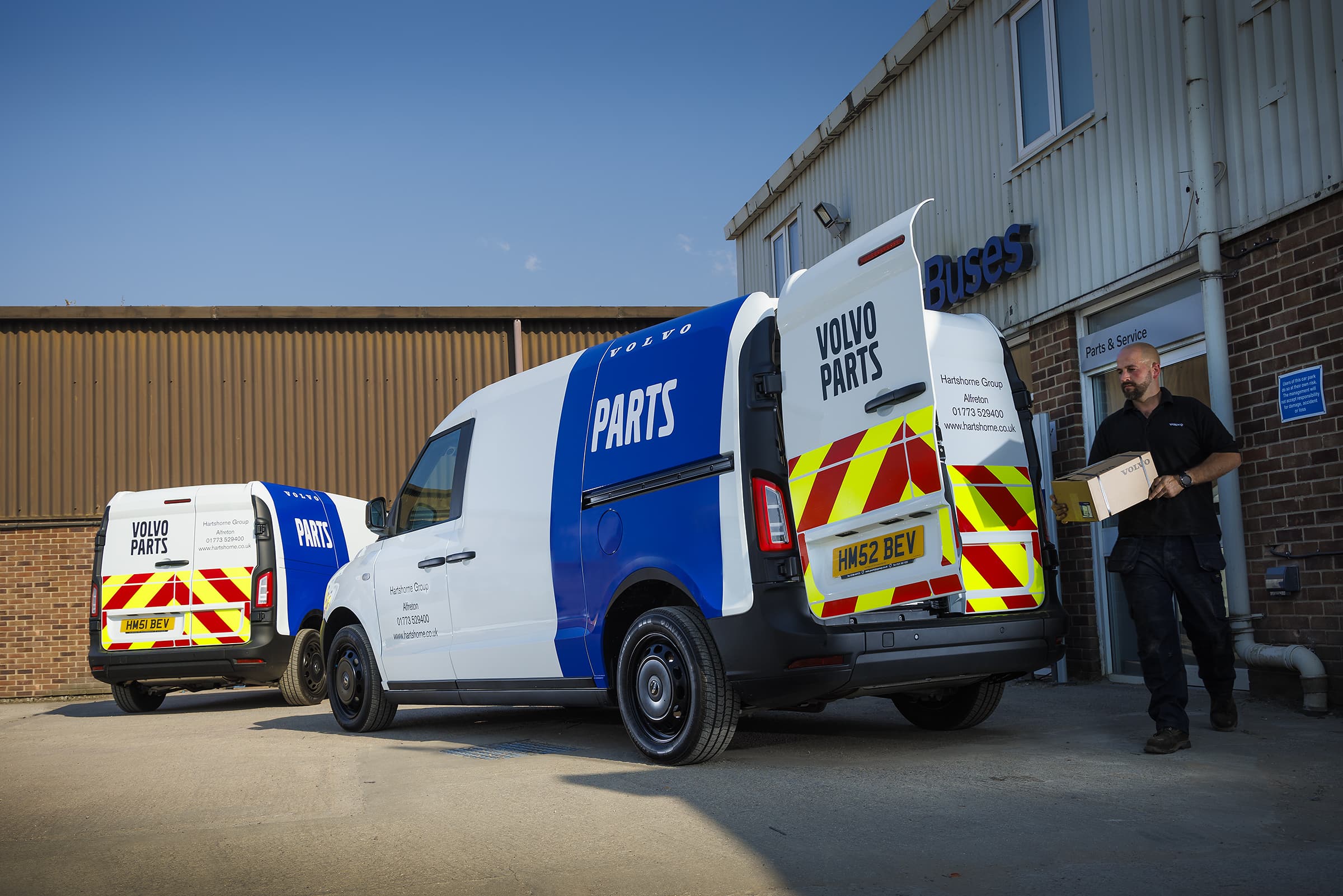 HARTSHORNE Group has taken delivery of two electric vans that will boost its on-going programme to promote sustainability.

The company – which supplies and services Volvo trucks and buses throughout the Midlands – says the vans will be used for its parts delivery operation at its depot in Alfreton.

The new electric LEVC vehicles are state of the art VN5 models that were designed and built in Coventry and supplied through the Paul Rigby dealership in Birmingham.

James Cowen, Finance Director at Hartshorne Group, said: “LEVC has a proven history in electric vehicles, and we believe these vans will be able to sustain and perform at the levels that our team require for a number of years.

“Commercially, this enables us to forecast our use of the vehicles over a longer period of time. We hope that if the vans prove to perform as expected this will eventually become part of a company-wide rollout.”

The VN5 models have a completely electric drivetrain, but are also fitted with a petrol range-extender that can be used to recharge batteries if they run down past a certain level. However, Hartshorne says that following a trial it anticipates the vehicles have sufficient range to run almost entirely on electric.

“Our drivers return to base at least once per day for lunch, so with a fast charge the vans should be ready again for afternoon deliveries. The reduction in fuel usage and transition to electricity will help us with to achieve our carbon reduction goals,” added Mr Cowen.

Richard Hudson, Commercial Director at LEVC, comments: “We’re pleased that Hartshorne Group has chosen LEVC’s VN5 to support the business in its transition to a more sustainable future.

The VN5’s range-extender technology and ability to charge in just 30 minutes completely eliminates range anxiety and is the ideal choice for the organisation’s busy drivers. We look forward to continuing to build on our relationship with Hartshorne Group through our valued dealer Paul Rigby.”

Hartshorne Group was named as a Sustainability Champion by Volvo last year for its on-going efforts to protect the environment. Measures adopted by the company include investing £1.2m in upgrading its company car fleet to hybrids and developing infrastructure to support heavyweight electric vehicles.

The company also encourages staff to walk or cycle to work as part of a Healthy Heart Campaign, which raises funds to install heart defibrillators within the community. The campaign has installed defibrillators in five Midlands schools so far in 2022. Hartshorne operates nine depots across the region, including major sites at Walsall and Birmingham.