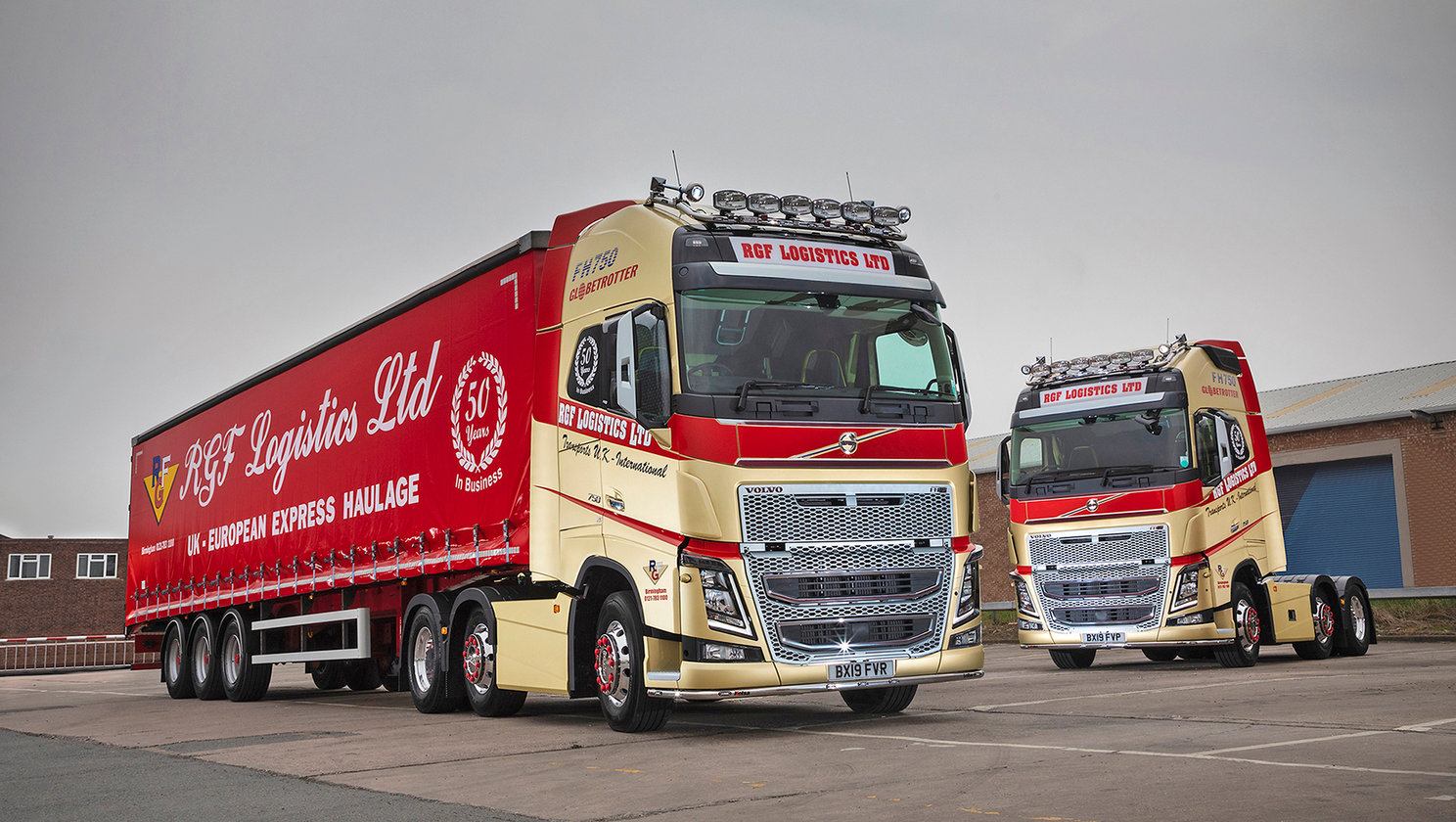 The FH16s’ are powered by Volvo’s D16K Euro 6 engine rated at 750hp, whilst the 6×2 chassis come with front steel and rear air suspension systems. I-Shift gearboxes and Globetrotter XL Cabs were also specified on the duo, which will be used on the company’s haulage and logistics operations across the UK.

Inside the new milestone motors, the long-serving drivers allocated to these Volvos’ will benefit from Drive Plus+ and Two Bed Living Packages, in addition to a range topping audio system, leather seats and reversing camera.

“Volvo trucks have had a constant presence in our fleet since the early 1970s, firstly with its F88 models. Currently the marque is proving popular with our drivers and Volvo’s performance levels meet the high standards we require. Therefore it seemed logical to have two range-topping FH16 750s’ as our Golden Anniversary vehicles,” reports Gary Ford, Managing Director at RGF Logistics Limited.

RGF Logistics opted for a three-year Volvo Gold Service Contract for the FH16s’ which will be carried out by their local Hartshorne Motor Services dealerpoint.

As Terry Harris, Operations Director at RGF Logistics Limited explains, “We’ve enjoyed a working partnership with Hartshorne Motor Services since the year 2000 and our policy is to opt for R&M packages for the Volvos’ first 36 months in service. Afterwards, the trucks come into care of our own workshop team and we also have an Authorised Testing Facility (ATF) on-site. Our standard fleet retention policy is a minimum of five years and we keep vehicles on more local work for the latter half of that period.”

A cleverly designed, special 50-year livery sets the new RGF Logistics Volvos’ apart from their fleet stablemates, as the company replaced their signature white background cab colour with a Golden Fleece metallic colour but retained the red waistband. The finished result is truly spectacular and the FH16s’ recently drew plenty of attention at Truckfest Peterborough 2019, where they were displayed alongside several vehicles from RGF Logistics’ heritage fleet of commercials.

Richard Ford established RGF Logistics Limited in 1969 with a refurbished Austin five-ton lorry.
As the company expanded, it moved predominately to European Transport during the 1970s and 80s, although nowadays the majority of weekly workloads cover the entire UK.
In 1986, Richard’s son Gary joined the company from school. Gary has managed the business since the late 1990s.
Volvo vehicles account for just over half of the company’s tractor unit fleet.
RGF Logistics Limited operates from three sites in Birmingham and offers warehousing and 3PL logistics alongside its traditional general haulage operations.