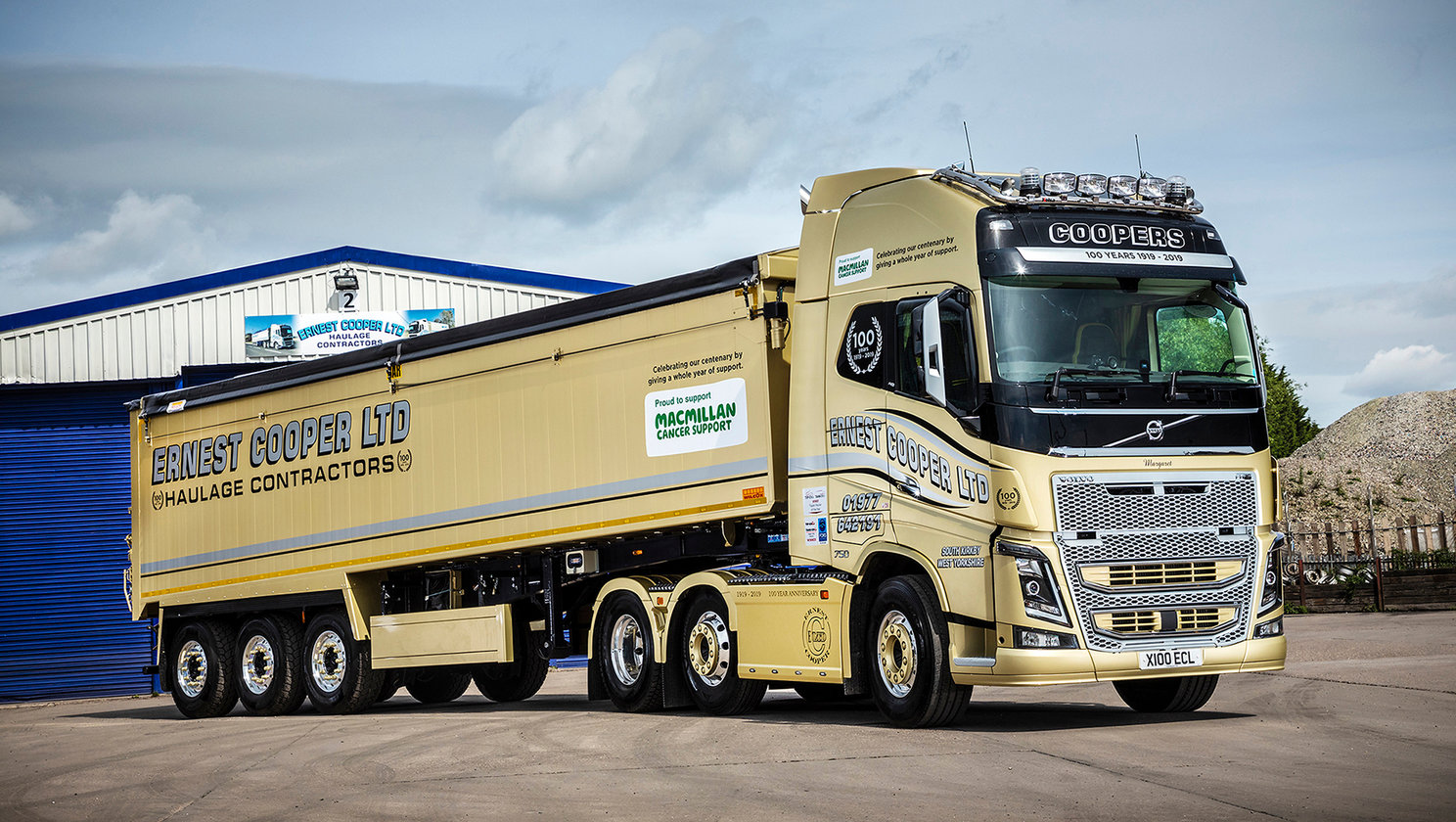 Supplied by Gareth Stone, Area Sales Manager at Crossroads Truck and Bus Ltd., no expense has been spared on the FH16, which is powered by Volvo’s D16K engine that boasts 750bhp and 3,550Nm of torque. The engine is coupled to a 12-speed I-Shift gearbox and other highlights include Volvo Dynamic Steering, two large stainless steel vertical exhausts from TruckMax and unique side skirts from S&B Components. The truck runs with a Wilcox trailer, which – like the tractor unit – has been painted gold.

The company was founded in 1919 when Ernest Cooper and his brother George started hauling axle units for trains from Leeds to London. They soon got into the tipper market, but the two brothers split in 1965 and Ernest went alone with his sons to carry on what is now Ernest Cooper Ltd. The business now has the fourth generation of the family on the books and runs 60 of its own vehicles (all Volvos) and around 60 tractor units for permanent sub-contractors.

Director and Ernest’s grandson, Lee Cooper believes it was important to recognise 100 years as a transport operator with a special vehicle, saying “It’s not the type of occasion that comes around every day, so we wanted to make sure it had everything on the truck that it could have.”

Lee continues, “It’s been airbrushed with a picture of my mother, who passed away from cancer eight years ago. We have also gone into partnership with Macmillan Cancer Support and there are graphics from the charity on the truck too.”

The graphics represent a wider collaboration between Ernest Cooper and the charity, as the truck will be raising money while it works.

“When it enters service, whatever the FH16 earns during the year, we’ll donate to the charity,” explains Lee. “It will be used in exactly the same way as any of the other vehicles, which means going to all of the same quarries and customers as our other vehicles, but any profit from the gold FH16 will go straight to Macmillan.”

The truck officially entered service on 16th June, having been formally unveiled to the business at a party in April.

“Only a few people in the company knew about it – I wanted it to be a surprise,” Lee reveals. “I was driving it around at night to make sure no-one saw me! We’re very pleased with the outcome and look forward to raising lots of money for charity over the coming year.”